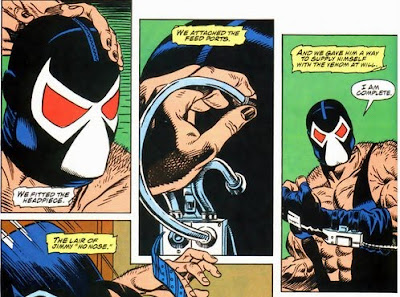 Tom Hardy will be playing the 1990's villain Bane in Christopher Nolan's 3rd Batman opus "The Dark Knight Rises". While Bane is mostly lame (he will always feel gimmicky/Batman & Robin/his always being misused as a dumb brute), he can and has been cool. His early introduction was pretty fucking rad. I mean he broke Batman's goddamn back, that's like impossible. Not to mention he himself is a formidable detective: he discovered Batman's secret identity after all. Dude is smart, in shape, has a foreign accent and haircut plus obviously he likes to party (venom will fuck you up, brah). Bane fucking rules!

The best use of him in media was in the original run of Batman: The Animated Series. They took an unaccepted, flash in a pan character and showed that if you are good at what you do, you CAN polish a turd: Bane fuckin' slayed in that episode. Seriously.

Mostly I wanted to talk about the new Batman movie. I think Bane is gonna be done real cool, though hopefully they don't put a mask on him, like they did on the Scarecrow (I can fool myself into thinking they did a good job with it, but I'm lying to myself - it fucking blows). But anyway, Bane were like one of my favourite bands in high school and I think they still rule.
Posted by Joey Gantner at 2:58 PM