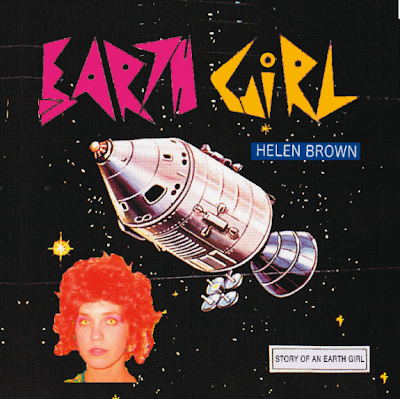 I don't know guys, it's early and this new project from members of the great Sonny & the Sunsets and just as great the Sandwitches comes with a lot of important information, maybe too much for this time of morning that I'd need to type up and then make sound like I came up with it: I didn't - I came up with this. But this song is way radical and it's coming out from friends Forest Family Records so I'mma cut and paste their press release. They did a great job with it:

Announcing the debut record from the soulful, “nomadic psychedelic folksinger” Earth Girl Helen Brown: a “unique mix of country, girl group, R&B, and ghoulishness,” brought to life by Sonny Smith of Sonny & the Sunsets, with help from Heidi Alexander + Grace Cooper of the Sandwitches. Here’s Helen’s story, as Sonny tells it:

“Helen Brown was born in Vancouver, Canada, but raised in an Athens, Georgia-based religious cult, and was blinded in one eye from a childhood baseball injury. As an adult, she dropped out of Evergreen and traveled the country for a while as a nomadic psychedelic folksinger, before forming her first band One Eyed Tramps. For years, she lived alone in a mountaintop in southern Alaska, where she befriended a Cherokee Shaman (later revealed as a fake) who encouraged her to pursue a frustrating academic career. Rampant drug use, frequent fainting on stage, and occasional self-inflicted knife wounds on stage led to more interest in her stage antics than her music. However, a few sides did emerge in the late ’90s (recording dates unknown), which feature a unique mix of country, girl group, R&B, and ghoulishness. Crude and amateurish at best, these recordings are appreciated for their sincerity and intensity of feeling.”

There you go, brah.