The songwriting of Justin Roelofs

MP3: The Anniversary - The Ghost Of the River
MP3: Justin Roelofs - Why do I have to take my pants off when you're the one who lied?! (featuring Pink Nasty)
MP3: White Flight - Solarsphere

The White Flight record has been getting a lot of well deserved attention lately from mp3 bloggers and various reviewers. That's probably what brought everyone over to the songwriting of Justin Roelofs, except a select few like myself who were huge fans of the Anniversary.

So today's (late) entry is dedicated to the songwriting of a Mr. Justin Roelofs. I made a post about the Only Children, the new project of Josh Berwanger, the other songwriter of the Anniversary. Feel free to check that out.

Choosing an Anniversary penned Roelofs cut (or any cut) was hard. In the end it was between this and another, but "The Ghost Of the River" won because it really showcasing a band working around him. He still very much owns the song with his unique voice and lyrics but the rest of the group really gives it depth. "Your Majesty" is an all time favourite for me, and though Vagrant has it out of print, it's still pretty easy to find. Take advantage of that asap.

After the band split, 3 tracks surfaced from a now solo Roelofs. The humourously titled "Why do I have to take my pants off when you're the one who lied?!" is very folksy. It has some really great backing vocals from Pink Nasty (who is worth seeking out).

White Flight, the current project from Roelofs? It's really and truly unclassifiable. I dare you to try. I can only say it's great, bright yet dark and will mostly get you off your seat and on your feet... or something.

White Flight's self titled record comes into physical form on March 6th on Range Life, but the kind folks who distribute the album (a little label called Saddle Creek) will give it to you 2 weeks early if you preorder.

I loved Hot Rod Circuit for most of their career. However, after their unlistenable last album, I can't say I was surprised to hear Jay Russell exit himself from the band. He had been playing as Diamond J & the Rough for years but it was only recently that we finally got a taste of what sounded like. From demos to (what seem to be) final versions, I have listened to these songs with such excitement.

"We Had It All" is pure nostalgia, stating "we had it all at 17". Anyone who looks back at life fondly can surely relate. Meanwhile, on "Betty Ford" Russell sings of having a problem and leaving someone behind because of it. It's a really sad number and the female harmonies, violin and pedal steel (courtesy of HRC's Spacey Casey Prestwood) really amplify that. They also are some of my favourite musical sounds so it's a sure thing for me to love it.

I'm looking forward to a full length. I hope it is delivered quickly.
Posted by Joey Gantner at 6:12 PM No comments: 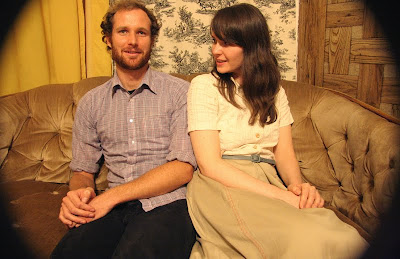 MP3: The Finches - The House Under the Hill

I know of the Finches because guitar player Aaron Morgan is a member of the fantastic instrumental band the Roots of Orchis. I always make a point to check out their side projects and was surprised (pleasantly of course) to hear his work with Carolyn Pennypacker Riggs as the Finches. It's pretty folksy, but Riggs has this voice that's adorable yet serious with these lyrics that tell such wonderful stories. They all seem to be able to relate to most anyone I'm sure. They worked like gangbusters for me.

I was a huge fan of their "Six Songs" ep and I love the 2 songs I've heard from "Human Like A House", out this Tuesday on Dulc-I-Tone. I'll be looking out for it, will you?

{buy the finches recordings from the band}
Posted by Joey Gantner at 8:38 AM No comments:

Email ThisBlogThis!Share to TwitterShare to FacebookShare to Pinterest
Labels: dulc-i-tone, human like a house, roots of orchis, six songs, the finches

I love free cds. Even if they suck. I was at my local independent record store last week picking up the new Berg Sans Nipple (see yesterdays post) and Deerhoof records a smidge early when my friend behind the counter was kind enough to give me a promo of "The Moonstation House Band" from David Vandervelde, released this past Tuesday from the kind folks at Secretly Canadian. He said it sounded like T Rex.

And I agree. This album is straight up rock and roll, nostalgia and good times. The artwork is stunning, the liners simple and recording just the right amount of lo-fi.

The opener "Nothin' No" seems to be a love song full of memories and feelings where Vandervelde belts out "let me tell you baby nothin' no, is going to keep us apart". It's followed by "Jacket", which he told Daytrotter is about "an actual situation about my first girlfriend and her rebellious high school years. She was so hot and never listened to her mom." 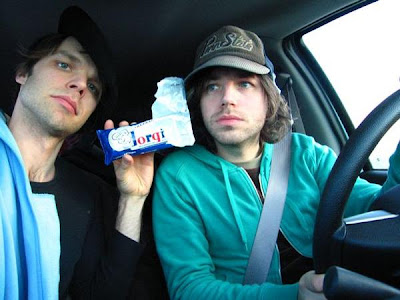 What got me excited about the Berg Sans Nipple was 2 things: Shane Aspegren of Lullaby for the Working Class was in it and it was being released on Team Love, a label I'm quite fond of.

What made me fall head over heels for them was this video:

"Along the Quai", released this past Tueaday, is 8 songs that feel very warm and organic despite featuring many computerized sounds. However, it also features soft vocals low in the mix, melodica, trumpet and more. Anyone who is familiar with Aspegren knows his background has always been as a drummer and that's no different here. I'd say the drums stand out the most. At times, both members play percussion and it really does wonders to make the songs stand out. Watch that video, you'll see what I mean.

Also worth seeking out is the vinyl version of this record: It's a double 180 gram vinyl with 2 bonus tracks. Both the cd and lp have a really cool cutout on the cover.

Posted by Joey Gantner at 6:53 AM No comments:

Email ThisBlogThis!Share to TwitterShare to FacebookShare to Pinterest
Labels: along the quai, france, lullaby for the working class, team love, the berg sans nipple

Polyvinyl released "Illuminated Manuscript" last year and it's a record I find myself enjoying more and more with each listen. It soars with fantastic drumming (what else to except from one of the best drummers playing today?) and great key parts. There are little vocals, but when he sings, Parks' has a voice that's both reserved and soothing. The lyrics, like the singing, are very sparse but poetic. Not everyone can pull of a song of two vocalists singing "la la la", but "This Garden Is A Maze" accomplishes it and is a true thing of beauty.

"Oh, Holy Night" appeared on a limited edition Christmas compilation released by Suburban Sprawl. It's available for download (along with songs from previous years) right here.

MP3: Band In Box - When Others Go South

Sweden's Band In Box has written what I have found to be my first favourite song of 2007. "When Others Go South" swirls with beautiful clarinet, a gentle acoustic guitar and singer Siri's gorgeous voice. It's wonderful lyrics are a winter love song, speaking of igloos and having tea with walrus neighbours.

She cites such inspirations such as "hospitals" and "animals", which if you do some looking around online, is quite true. Her myspace is filled with photographs of people with animal heads or bodies and her label states that Siri is taking courses for surgery and virus attacks. Also there was an ep and another band member, but both are no longer available.

The song and artist both paint a picture that is slightly unique and exciting. I very much look forward to future recordings.
Posted by Joey Gantner at 1:53 PM No comments:

As I am a huge sucker for female vocalists, one of my recent (and possibly all time) favourites has been Jolie Holland. She has a voice that is familiar but very distinct and the emotions shes able to display with it are incredible. I think "Springtime Can Kill You" is her best effort and one of the best things to come out of 2006. I've heard some new songs she did on a radio session and they were absolutely lovely. I have no fears about the follow up whatsoever.

"The Grey Funnel Line" comes from a 2 cd compilation of pirate songs Anti released. It's very sparse and intimate sounding.

{buy jolie holland recordings on insound}
Posted by Joey Gantner at 9:47 AM No comments:

Lullatone's latest effort "Plays Pajama Pop Pour Vous" came out in December of 2006 and I didn't purchase it until a couple of weeks ago. Had I gotten it sooner, I would've put it on my best of 2006 list (to find out what I did put up, along with some friends, please visit: http://www.pinkteeth.com/lists06/).

It's a great record written to sleep and relax to. I'll tell you, it works like gangbusters I swear it!

I know most blogs have been posting "Bedroom Bossa Band" (and with great reason, it's one of the best songs on the lp) and I have to, but I also wanted to give you another song to give you a feel for it. All "bass drum" sounds were made by a pillow. Insane. Buy the record, it's out now on Audio Dregs.

Here is the video the band made for "Bedroom Bossa Band". It's what first made me fall in love with them. Enjoy:

On a side note, I apologize for my absence, I know I moved all the posts over from one blog to this one and posted nothing. Sorry, I was just getting adjusted with a new home, a new life and a new computer. Everything should be more consistent now!

{buy lullatone recordings on insound}
Posted by Joey Gantner at 10:34 PM No comments: