Animal and the Muppets 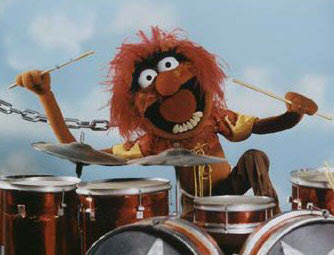 For this mp3 post, I've chosen a track that hits close to home for me. Perhaps it's because I had originally named a band Dr. Teeth and the Electric Mayhem for a fondness for all things playful, although there was hardly much mayhem going on there. Except one, and his name was Animal. Not only was he a fantastic drummer, but he had a passion for the instrument not seen since Keith Moon and John Bonham. His enthusiastic drumming style brought smiles to the faces of millions, and his influence on pop-culture oft goes underrated. Vocally, one can equate Animal to what Tom Waits and Shane MacGowan both sound like now with their whiskey-grit bellows carrying the music into otherworldly dimensions. This is an essential track that I'm hoping most of you do not have, and upon downloading will instantly envelop the nostalgia. Enjoy.
Posted by Joey Gantner at 10:02 AM No comments:

My contribution to the team this is week is a double-shot of Mr. Nick Cave in celebration of his new Grinderman album being released in North America at the beginning of April. The first track is a more recent Bad Seeds B-Side (specifically from the “Nature Boy” single) and‚ in retrespct‚ it makes perfect sense that would continue into an aggressive territory. The track is called “She’s Leaving You” and can easily be found on the three cd B-Sides And Rarities set.

For the latter track I was contemplating another B-Side (this from the “No Pussy Blues” single) but seeing as how it is rather mellow‚ you'll be getting the single instead. After almost thirty years of making music with various projects‚ Mr. Cave shows no sign of slowing down‚ and seeing as how the quality has never really come in question‚ the world would be more than glad to hear the gifts he’ll continue to give the world.

Miami's Cassette came to my attention recently through the form of electronic mail. It's very loose music, laid back complimented with soft vocals. "Ladybug" is full of upbeat percussion while backed by delicate words and an acoustic guitar, making it an odd mix. The track "Shaved" isn't what you'd think a song would be that starts off with the lyrics "Today I shaved my balls".

"Beautiful California", in all 35 tracks, is out now on Atomisk/Honor Roll.

{buy cassette recordings from atomisk}
Posted by Joey Gantner at 7:27 PM No comments:

MP3: The Higher Burning Fire - In Your Backyard

This band has gone on to do a lot of great things. Members can currently be found in White Whale and The New Amsterdams. I found The Higher Burning Fire on Second Nature's website, and when I saw them I knew I recognized the name.

"In Your Backyard" is a song that was recorded for and placed in a children's film. I was told there is some 2nd album that never got released. After hearing I have so far, I hope that someday it sees the light of day. It's just real sunny, fun, harmony filled rock that puts an instant smile on your face.

Danielle Stech-Homsy plays under the moniker Rio en Medio. She rolls in Brooklyn and plays delicate, experimental folk. It's sparse, but in the end it's more together then you think. There is something special and beautiful here for sure. Her debut, with a really badass title, "The Bride of Dynamite" is out now on Gnomonsong.

Casiotone For the Painfully Alone

Man, I love the song "Graceland". The way the melody ebbs in sadness and flows in anticipation, expressing exactly what's being sung. Hearing it as a kid - did anyone's parents not own this? - it made me long to be grown up and to know girls who could crush you by "brushing their hair from their forehead". Listening to it now, it's a diamond-in-the-rough, a gleaming, chiseled jewel of pure American Pop: road trips, Elvis, movie stars, fathers and sons, love and loss. It's almost too perfect.

Which makes it perfect for CFTPA. If there's a common thread to Casiotone songs it's that his heart is in the right place but something's forever awry. Like Thom Yorke in "Everything In It's Right Place", Owen Ashworth can make you feel like even the possibility of order is disconcerting. And grant him this: if he wanted to, he could rip this fucking song apart, singing it in a roar instead of a growl, shattering every little poetic line with a wrecking-ball of desperate, raw feeling. You can sense him wanting to - a grown man crushing a childhood relic, taking his world-weariness and busting up the nose of everything Sophisticated and Sensitive. But as much as I would enjoy the catharsis of hearing that (perhaps live? - Casiotone fans should conspire to get Owen totally bombed before playing and see if he won't shatter - I mean absolutely fucking demolish - this song), the tack he takes, I think, is the savvier one.

Gone is Paul Simon's baby-boomer crushed idealism, sad and sweet, and in it's place is a voice so aching it's agitated, honoring a lullaby of lost love through barely-contained gritted teeth. And isn't this us? I mean, think of the real Graceland now, how sold-out, dumbed-down, corrupt and lame it's become. It's about one step cooler than Disneyland. It's silly to even fathom it now as a place of redemption. Perhaps it's disdain for the way our parents, the Baby Boomers, have allowed things that were once cool (including themselves) to become so selfish and tasteless and shallow. Think of how different they are from how we are - how they all joined fraternities and sororities and got married in their 20's and voted for Reagan and brought their kids up on McDonald's. And think of how it impossible it seems sometimes to really find love. And how embarassing and shadey our Government is. And how little we get paid compared to what we have to pay. And all the commercials that bombard us. And how so much of what we know is meaningful somehow keeps turning to mush.

Casiotone knows all this. And by covering "Graceland", he's taken it upon himself to fight back. Nothing's sacred, Boomers. His "Graceland" isn't as pretty, sure, but it's real and that, right now, is our currency. It's for us that the drums come on like a staccato march, some home-brewed Timbaland, a lo-fi call to action. For us that lovelornness is recast as nerve-wracked. And for us the ending cacophony which would never be "received" by Memphis or Paul Simon or our parents. Fuck Graceland, seriously, shit's getting way too heavy. We've got to find somewhere new, start fresh and do the whole shebang right this time.

I wonder what Casiotone calls his apartment?

{buy casiotone for the painfully alone recordings on insound}
Posted by Joey Gantner at 12:53 PM No comments:

Bears were one of the first bands I really loved when I got into checking up on this whole mp3 blog craze. One of the first blogs I really embraced, You Ain't No Picasso, posted about them and have a couple of times.

Their music is just so carefree and loose, but in a structured way so it's not all over the place. There is focus, but they do it without making it apparent. The harmonies that I look for are all there, and Bears make it so anytime you put them on it's an enjoyable listen.

Their self released ep "Shortest Day Of the Year", which today's song comes from, is out in April. Snag it.

They're doing an instore in Indianapolis tomorrow at Indy CD & Vinyl at 4pm. I'll be there for sure.

{buy bears recordings from the band}
Posted by Joey Gantner at 9:35 AM No comments:

Email ThisBlogThis!Share to TwitterShare to FacebookShare to Pinterest
Labels: bears, shortest day of the year

Sun Kil Moon's timeless "Ghosts of the Great Highway" was just reissued this past February on songwriter Mark Kozelek's own Caldo Verde Records.

I never got into the Red House Painters. I remember in high school, my friend Zach would bust them out a couple of times in his car while we were going to band practice or something but it was never anything I was smitten with. When I was out in Portland, my then roommate Ezra gave me GOTGH for my 21st birthday. My car's stereo was stolen at the time so I was listening to all cds with a discman and headphones. I left work early because I was hung over from the birthday celebration and on the way home, this album really got to me. It just complimented the world around me so perfectly that it became an instant favourite in that instant.

I have many great memories around this disc, the greatest involving a beautiful girl and a train. I've posted the one-two punch of tracks 7 and 8. "Lily and Parrots" is a flat out rocker, while "Duk Koo Kim" is slow, building and building to something epic. It's a long one, so be patient with the download/song. And of course, enjoy!
Posted by Joey Gantner at 10:04 AM No comments:

NOTE: Today's blog comes from my good friend Matt Giordano, who will guest here from time to time. Fuck yeah.

ALSO: I am throwing up the mp3 and video for "And I Found This Boy" on here because I was planning on posting it anyways. The rest is all Matt. Enjoy.

With the year finally beginning to get in swing with March and April really being the start of a ton of new releases, I've chosen to bring what I consider Razzia's major Spring release, the debut full length "Though, I’m Just Me" by Maia Hirasawa. It's lead single the highly uptempo singalong “And I Found This Boy” will be a great track to get people’s attention (as it has begun making appearances on various mp3 blogs) and rightly so—it’s a stellar track. However‚ the bulk of the album goes along at fairly a slow pace‚ filled with beautiful songs. Here is‚ what I consider right now‚ my favourite track on the album—the glorious and wrenching “You And Me And Everyone We Know”. I hope you all will enjoy this as much as I have been.

I wish I could go into detail about these songs from Sweden's Ingenting, but since all of the lyrics are sung in Swedish, I can't do much for you. In fact, they are the only band on label Labrador, who is based in that country, who doesn't sing in English. "Mycket Väsen För Ingenting" is full of great sunny pop and psych folk influences that makes for a pleasant listen. It manages to change up every song before getting stale and predictable and captures a collection of moments that become a strangely cohesive lp.

{buy ingenting recordings from parasol}
Posted by Joey Gantner at 11:21 AM No comments: