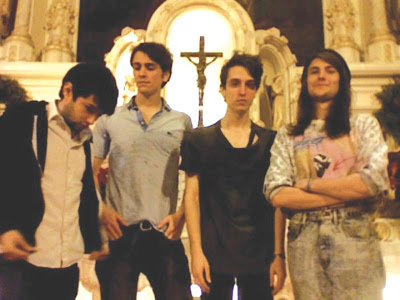 MP3: Beach Fossils - Fall Right In
As Captured Tracks quickly cements itself as the Drive-Thru Records of indie pop, time was short before its bands all began sounding alike. To celebrate such a fashion, they're releasing a new EP by Beach Fossils. Gone are the static-filled charm of their debut record, the innocently hesitant drumming, and the whimsical guitar patterns. Instead, the produced drumming and clarity of the tracks causes it to sound exactly like label-mates Wild Nothing (unsurprisingly one track does feature Jack Tatum). One could argue very easily that both groups already were heavily linked musically and not be wrong, but when bands evolve you'd hope they would venture away from their peers—not ever closer.
Posted by Matthew Giordano at 10:20 AM

Email ThisBlogThis!Share to TwitterShare to FacebookShare to Pinterest
Labels: beach fossils, captured tracks, what a pleasure