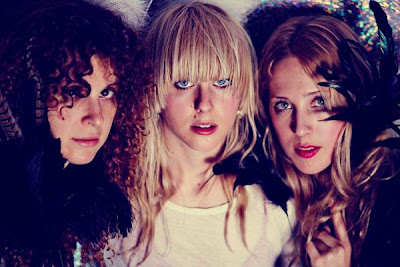 Welcome to a new feature! Everyone loves new features right? Well, I think they're pretty cool at least. HOT TRAXXX is essentially kin to "The Best Song Ever", except it features more current music (re: under 5 years old? I don't know yet, you know we like to keep shit loose here) and are digested further by us in our personal lives, maybe we've been listening to a song a lot? We should check our iTunes play count? Whatever, before it gets nuts: just party on!

Cliffie Swan used to be called Lights until that got crazy confusing. During that time, back in 2009, they put out a record called "Rites" on Drag City. It always feels weird re-tagging already released music with a new band name, but seeing as I got into them post-Lights, I figured I'd give it a shot. Anyway, this song (and video) rule a whole fucking ton.

PLUS! Relevant news: member Sophia Knapp released a new 7 inch single today for "Nothing to Lose", also on DC. Get that here: http://www.dragcity.com/products/nothing-to-lose. I bet it's awesome. Anyone have a download?