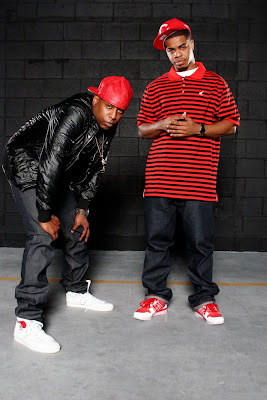 I loved the "Train of Thought" record by Reflection Eternal (aka Talib Kweli and Hi-Tek) a whole ton when I first heard it way back when. I was in high school and my friends & I would constantly add tracks from it to mix tapes and cd-rs to skate to (this was pre iPods aka I'm old). It was fucking dope. Some of my favourite memories are during those sessions.
So, 10 years later, the duo reunite for their sophomore lp "Revolutions Per Minute". From what I've heard so far, it is less influenced by where those dudes were at in that time (post-Black Star, Hi-Teknology, the Rawkus sound) and more in tune to their current personas... which is fine, great even. Really, on their own they've had some highs and lows, but in the end I've always been happy that they are around and at the end of the day, they're still part of the best things about hip-hop.
So check out a stream of "Midnight Hour" featuring Estelle (which is the clean version, but don't let that stop you) and see what the fellas are up to. So far so good. Now let's get that Black Star follow up started.