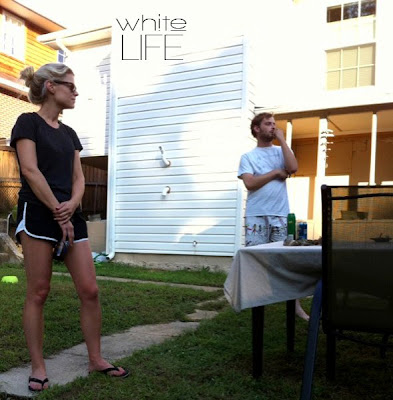 MP3: White Life - Time Is Wasting
MP3: White Life - Flirp
MP3: White Life - Follow
MP3: White Life - I Want Love
(NOTE: 4 is a lot of tracks and certainly more than we would usually feature, but since the very awesome Ehse Records has this record available for free download I figured I'd give you all I could to make you fully back this band. They do have vinyl and cdr's available, so totally snag one of those. I got my LP in the mail today and it sounds like a really, really tasty sandwich.)
I'm finding that a lot of nostalgia is already surrounding White Life for me in only a month. That's a word I hate to throw around because it is insanely over/misused in music reviews - just because a sound or lyric evokes a certain familiarity doesn't automatically make it a thing from the past... but I digress.
This band's record was introduced to me by a friend of mine and it's been a pretty long time since that's happened, at least from someone unconnected to music journalism / blogging / industry / whatever. That was a neat feeling, especially since their recommendation turned out to be such a homerun.
White Life are two siblings based out of Baltimore who make music that is nostalgic only in the fact that their's is an album that hangs around - after the first song you know you're going to be blasting it all summer long. You stick around to learn the hooks, the best beats, your "HOT TRAXXX" if you will. Pop music hasn't felt this passionate or intimate on a ambitious scale in a lightyear - in fact this will probably be the last time it ever will, so put on some comfortable shoes to dance in and then boogie till you fuckin' die.
Posted by Joey Gantner at 2:15 PM