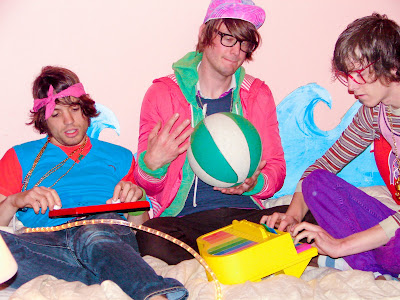 NOTE: Today's contribution comes from Zach Hangauer, who has been missed around these blogging parts. Hopefully he is enjoying some love at this moment, German or not. Fuck yeah!

If the mid-70's Kraftwerk boys sang a verse without the vocoder and then Weezer, a year before the Blue Album, sang the octave-up response, you'd have the gist of "German Love". That there is anything more going on, any brilliance in the structure or a mixologist's melange of sounds and styles - much less drums on full-blast A/C, much less that Portland art-collage wink wink - is gravy, frosting, whipped fucking cream.

"German Love" is the only Starfucker song I've heard, so I have no idea if they are one-hit wonders, but the more I think about it, the more I'm certain they know what's up. Even the words, "German Love" spark sparks. The "German" part is famously literal, wracked by philosophical passions but incapable of expressing them casually. And the "Love" part is the most open, earnest, vulnerable passion we feel. So Starfucker channels Kraftwerk to sing "German Love, I will give it to you/ give it to you/ give it to you" like hungry robots, as though repeating the desire will fulfill it. And then they bop their mop-tops and froth their Weezer falsettos into "But she won't have a thing to do with me/ to do/ to do with me", full of teenage - twenty-something - universal longing, howling wolves by way of a boy's choir. Need a cherry on top? Having set the stage, Starfucker throws the two themes together, the Capulets and the Montagues, desire and defeat, all intermingled like it ain't no thing, like indie-rock pulls off drama like this all the time, so effortlessly, so puzzle- solving-perfect.

So what is this? Synth-pop? Indie-rock? Ganking tween from the tweens for a stoned and boozy Art School party? Acoustic guitarelectronica? There aren't more compressed drums mixed with more diffuse cymbals anywhere on MySpace Music - they've totally flipped it. 10 years of digital Portastudios and we're finally making sense of the way it sounds. I'm wondering if this is the palette for the rest of the record too? D.I.Y. pumped through the digital makeover machine except now there's bands that are too fucking savvy to let it neutralize them.

"German Love" sounds like a glass ceiling busting, like the romance between digital and analog is finally getting past the sniffing-butt stage. It's "Power to the People" seized by people ready to wield it. And they're three kids from Portland! And they're packing maracas!

"Starfucker" is released September 23rd from Badman Recording Co.
Posted by Joey Gantner at 7:42 AM

lol. 1 hit wunder. listen to hard smart beta, Rawnald Gregory Ericson the Second, Mike Ptyson, and a shit ton more. they wuld haf to have a hit to be a wunder. they r just good and much better in concert than recording. lol

No way duder, have you heard "Flordia"? Or "Pop Song"? Plenty of hits on the record, and the songs you named are quite fine in my book. Thank you for coming along to let us know your thoughts friend-o!

I actually heard them sing "turn around and I'll give it to ya" up until know... so much for my ideas about German love.

The "German" part is famously literal, wracked by philosophical passions but incapable of expressing them casually.


That's crazy. I'm in Germany right now doing an exchange year, and all of the guys I seem to like have this problem. I never new that "German," in a way suggests unexpressed feelings, but it totally makes sense! Right on the money there...